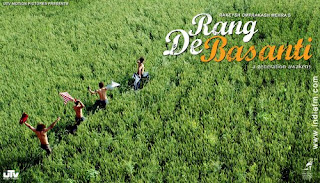 It says - A Generation Awakens... And it tries the best shot.

In this contemporary rendering of the legendary story of Bhagat Singh, director Rakeysh Omprakash Mehra passes on the message to the young generation brilliantly and almost effortlessly. In an unusual but highly effective format, the scenes shift from historical to contemporary settings flawlessly and it's easy to assimilate the smooth transitions. A.R. Rahman's music with Prasoon Joshi's lyrics create a magical effect.

With its great script, the movie keeps the audience spellbound. The imagination, however, becomes too much in the latter half of the movie when, in protest of Ajay's flight accident, the five young men shoot the defence minister and then broadcast their feelings on the radio.

The movie poses a problem - of the nation gnawed by politicians. But, leaves it at that without giving a solution. It fills the youth with enthusiasm, with aggression, with devotion, but stops at that. Swades, on the other hand, was more realistic with a direct message.


Posted by KV at 1:26 PM
Email ThisBlogThis!Share to TwitterShare to FacebookShare to Pinterest
Labels: Thoughts

nice review, i felt the same after watching the movie.