Biography of the helmet 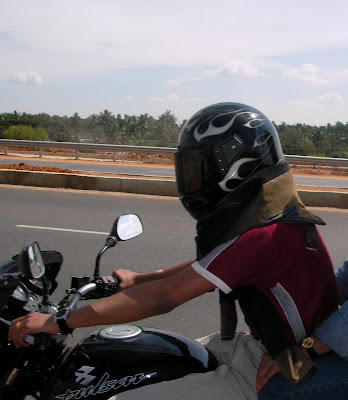 It was a regular busy evening in the month of August of the year 2006. The city of Bangalore, with its ever snarling traffic and forever romantic weather was witnessing the daily tantrums of riders on its busy J.C. Road. Air seemed to be still, and so did the tiny dust particles laden all over it, and so did the vehicles strewn all across the width of the street.
The moist, stale smell of thermocols and cartons hit the nostrils of the young man still exuberating with the heart-thumps caused by riding a new motorbike as soon as he entered the helmet shop with the almost-faded signboard at the junction. In a perfectly styled manoeuvre, he had just finished twisting the keys of his new shining black bike bought recently through an EMI scheme under faint hopes that his parents would help him out paying the monthly nuisance. The bike, being new, and as happens with all new relationships in the life of a guy, had suddenly seemed to him as his better three-fourth, as if this is 'the one' he had been waiting for all those years, the one for whom there are no comparisons, and nothing better can ever happen in his life again - finally in love! Anything inferior for her would have been a contempt to him. The guy was KV, and the bike was the KA-51J-4725 Bajaj Pulsar. 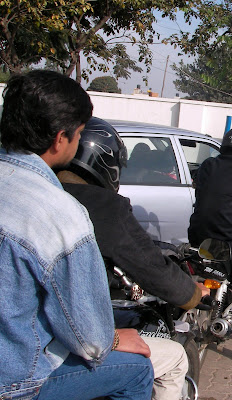 He enquired for the best available helmets in the shop. Various helmets in various colours and shapes and tattoos on their backs screened past his inquisitive eyes, but none seemed fit for the beauty standing outside in that magnificent, side-stand pose. He was looking for something just perfect! After all, for every future trip with her, this particular helmet would ensure he didn't get too uncomfortable or fumble while communicating.
And then, suddenly, as if the destiny itself had bestowed unto him, he spotted it! A shining black "Volga, Born to Guard, The Life Partner of your Choice on the roads", with white flames painted on its sides - the helmet was smiling at him, and he knew at first sight that he couldn't get anything better as a companion on all his future rides with 'her'. The deal was struck! And hence started his long-term commitment to both the helmet and the beauty waiting outside. 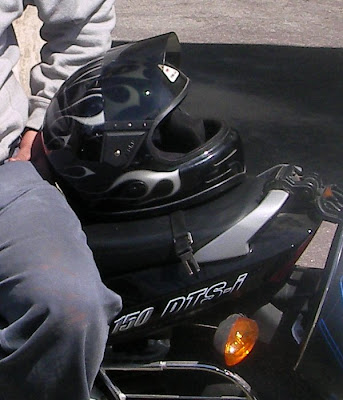 The helmet, in the initial days, tried to compete with him. There were times when he forgot to take the helmet along on voyages with her, and the helmet, through some black magic in-sync with its colour, ensured that he was caught on one traffic signal or the other by a paunchy policeman on the charge of riding the magnificent beauty in a one-eighth naked state (read, without the helmet).
The situation improved fast as both discovered each other as complementary - none could exist without the other when it came to riding the beauty, and both developed some sort of a tacit agreement to the fact. The first 'woman' to share the space with him on the bike was a colleague from office. She was kind-of good looking, and the helmet ensured that the sacred act of looking at her in the rear-view mirrors was perfectly shielded by its black visors. It was a trade-off, the woman's 'colour' was dimmed by the tinge of the glass, however, the 'form' was up for however minute observations without even being noticed. The helmet, in return, was given a chance to sit in the woman's lap with some pretext of why he didn't want to wear it.
The helmet never complained. Once when he was slightly drunk on a Saturday morning (rather a long Friday evening), and he decided to undertake an 'extra-long' night ride with her all the way from Bangalore to Mysore at 2:30 am, the helmet was terrified at first, but never resisted. Its visors had to undergo the terror of being the graveyard of numerous white-green flies all along the way, sticking their juices and lifeless bodies on it. At the end, he didn't even bother to clean it and the black visor lost its sheen and true colour amongst spots of all possible colours of the spectrum. At another instance, the helmet was tucked at the back of the bike, its body handcuffed with a helmet lock, and was left to bang its head continuously on the rear number plate. The silly reason was, he wanted to feel his adrenaline by riding her amidst heavy rains, but wanted to retain the helmet for safety purposes at traffic signals. For him, it was the joy of feeling the heavy droplets falling on his body with largely unbuttoned shirt and the excitement of wet winds gushing in his hairs, while for the helmet, it was the torture of being inundated with water with scant care to the soft foam inside. At other instances, the helmet even had to undergo the difficulties of adjusting to the bad breaths of his numerous friends borrowing it, many a times, the effect accentuated by a slight excess of alcohol in their throats. The helmet, however, never complained. 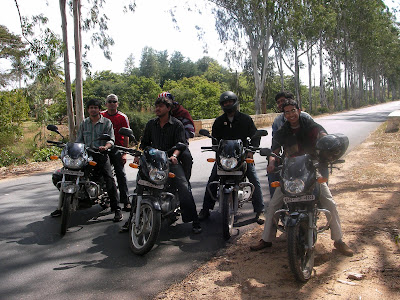 The helmet always remained loyal. When he moved out of Bangalore, the helmet ensured that in spite of all weight considerations, it was included in the final checklist of the Calicut consignment. It maintained its undying respect for 'him and her', even though, as time had progressed, he had kept on getting better, and the beauty had kept on getting worse with marks of age. His love for her, as happens with all old relationships in the life of a guy, had already started getting past the peak of the 'normal curve' of attraction. The helmet, still, remained a loyal companion for all their wild voyages exploring Kerala.
One fateful day, and he didn't even care to remember the date or the person involved, the helmet was suddenly gone out of his life! He didn't remember whether he was drunk and asleep, or simply asleep, or busy-with-nothing in his hostel room, when someone borrowed it, and because he never really cared for the loyal helmet, he didn't care to ask it back as well. And when things are gone, as happens with all lost relationships in the life of a guy, he started feeling the pinch. He had to borrow a helmet from someone every time he wished a ride on her, and he craved for his lost companion more than ever. He made a tacit resolve that he would clean the visor and its body with a soft damp cloth if ever he got it back. And he has been waiting in grief ever since.

Posted by KV at 6:29 AM
Email ThisBlogThis!Share to TwitterShare to FacebookShare to Pinterest
Labels: Humour

The beauty is "The Black Bajaj Pulsar"- the elusive bike possessed by every third biker in Bengaluru.

Since when did they start making helmets which fit your head? Never thought of it before :)

How on earth could you (by your sheer carelesness)let her go??

One a sidenote- well written.