There goes a saying: when Salim Nuruddin Jahangir, the famous Mughal emperor, was asked about his greatest desire on his deathbed, he said – "Kashmir, the rest is worthless."

Perched at a height of 8,700 ft. above MSL, this small town of spectacular beauty is an experience so pure, that it has the power to cleanse the mind and soul. Spending time at Gulmarg could be a freedom from the earthly vicissitudes for few, a spiritual awakening for some, and probably the best physical and mental liberation for many. Writing about Gulmarg is as much an exercise in vain, as trying to describe 'love' in writing. Maybe that explains why Kashmir inspires poetry – a higher form of writing, and when written in Persian / Urdu, probably the highest.

Situated at around 50 Kms west of Srinagar right in the lap of Pir Panjal Range, this "Meadow of Flowers" literally touches the clouds. Getting to Gulmarg from Srinagar needs going a bit north via National Highway 1-A, and then taking a left turn to Gulmarg road. Government buses have a service directly from Srinagar to Gulmarg, though I had to take a different 'local route' – the J&K State Road Transport office told me that the buses don't ply unless there are at least 10-12 passengers; today morning, I seemed to be the only one trying to get to Gulmarg. My journey included finding a city bus to the extreme west corner of Srinagar called Batmaloo, then getting on one of the local Sumo vehicles to Tangmarg (a place which also serves as the 'base' for Gulmarg's skiers during winter months), and then riding another small local bus uphill to Gulmarg. The free travel tips were from a chai-wallah a little away from the TRC, after I was told with a straight face that the only other way to get to Gulmarg is by hiring a taxi (and spending a bomb).

The road to Gulmarg has nothing of note as long as you are on NH 1-A. Once you head west, there are chunks of paddy plantations on both sides upto Magam, followed by some apple, cherry, almond and walnut orchards upto Tangmarg. From here to Gulmarg is about a 14 Kms ride uphill through numerous hairpin bends, blind curves and narrow, valley roads. The drive is lined by fur, pine, chinar and papyrus trees, and there is a wonderful view of the valley down below as you climb up the mountains. The temperature starts to drop as you go up, and once I got out of the bus, I was somewhere in the range of 15 degrees C. Spotting my t-shirt while serving tea in the morning, Abdul had asked me to keep something warm in addition to the umbrella I was carrying, and I had decided to trust him more than the weather forecasts which always hovered around 25 degrees C – a simple sweatshirt I had did turn out to be much useful. 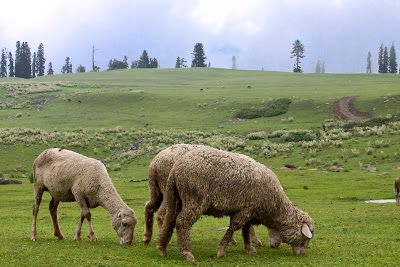 The setting at Gulmarg looks exactly like a hilly landscape painting (or let's say, it's the other way round) – mountains all around, clouds floating at low levels, carpet of green as far as the eyes can see, interspersed with small wooden cottages with slanting, tin roofs, horses grazing in the field, and everything coated with a varnish of fresh mountain air and shining wet by the wandering clouds. The name "Gulmarg" gets justified when you look around a bit carefully at this picturesque setting – there are small white flowers all over just like in paintings (or the other way round), and a local horseman tells me that this place has natural blooms, with different colours of flowers naturally growing during different times of the year; during these months it's white.

The Gulmarg experience has only begun.

From Gulmarg, there runs the highest cable car in the world called the "Gulmarg Gondola", which takes you first to Kongdori (10,000 ft. above MSL), a small bowl-shaped valley amidst the hills, and then to Affarwat (13,000 ft. above MSL), one of the mountain peaks in the Pir Panjal Range.

The Gondola ride in itself is a journey which does not seem to be of this world. The cable cars operate on towers around 25 ft. high, which implies that the rider floats over the hills through the clouds and rains, in between the trees. As one moves up, the valley continuously seems to recede below, gets hazy, and finally disappears into the clouds – if someone ever built a staircase to heaven in those Hindu mythological literature, it might feel like this. There are points in the ride when the car might stop for a few seconds to about a minute: that usually happens when the cable motors are temporarily stopped for loading construction materials on one of the cars in the boarding area. At one point, I found myself hanging in the sky for a minute, with no visibility around except pure white clouds, and with a gentle swaying of the car in the slight wind – words fail me here.

The first stop, Kongdori, feels like a liberation. It's a small, almost flat terrain in the mountain inhabited by some nomadic tribes during summers – these are the people who can be found grazing numerous sheep in this area, and living in thatched huts covered with yellow plastics. There are a few eateries around a region called 'the seven springs' here, and I decide to munch on a plate of Kashmiri Pulav, washing it off with a Kahwa. The silence here is pure, the calm is more than blissful, and the beauty doesn't have even an iota of artificiality built into it – sitting here, I wasn't thinking ahead, or into the past; the liberation did have its full sanctity and purpose established without authority.

The second stop, Affarwat, is where you feel an adrenaline, a sudden purpose, almost an ambition. Stepping out of the cable car shelter, you are greeted by rocks, boulders, some ice on one side of the hill, heavy clouds, all mixed with intermittent rains and a gentle wind. The ice portion is encroached and almost labelled as the tourist area with sledges going up and down, and the rest of this place is like a crossover between the earth and the sky. Down below, there are clouds, and it feels like you are standing on an edge of the planet, while above, the peak which is still quite far up, is only slightly visible within this uniform blanket of white. Something inside me wants to climb up, higher, into the clouds. It isn't very cold here, and my sweatshirt is enough to keep me suitably warm. I start negotiating my way on the rocks and boulders; the air is thin and tires you easily, and running shoes aren't the best bet even for a mild hike – I slip at places and that does make it scary here. I get to the top and I am panting profusely by now. And suddenly, everything so far in life seems worth it, just because it could cause this tiniest sense of purpose here which was for, and by, me – and all of it was achieved through pure adrenaline.

A signboard here says "Restricted area, trespassers will be prosecuted". This, as I get to know later, is the Indo-Pak LOC, and the no-man's land begins at that signboard.

I walk down a little more carefully, have a cup of tea near the cable car shelter, and get on the ride back to Gulmarg. I feel slightly dizzy, probably with heavier than normal exertions on self in that thin air and just one meal during this long day which is already clocking evening hours. But it all seems to go away with a single view of the valley again.

Kashmir can heal you.


Posted by KV at 1:37 PM
Email ThisBlogThis!Share to TwitterShare to FacebookShare to Pinterest
Labels: Kashmir, Travel

Why don't u try writing a couplet yourself on Gulmarg.

@Anonymous:
Want me to disgrace Kashmir by even trying? ;)

I want u make an attempt to give it the credit it deserves; that would require a little more effort. Rest is ur choice!:)

I've been fortunate enough to have done some trekking, and your post reminded me of all those exquisite places and sensations. It's not Kashmir specifically that heals you, but mountains. Nice post.
(Vishal B, K 2007)

It is amazing the way u have described the emotions of kashmir...the virgin beauty that has been brutally raped by people for their political gains...M wondering would be the mental state of ur hotel attendant, the shikara rider and all other whom u met who have seen so much blood and violence...and ur mental state when u see such a natural beauty which is surrounded by automatic weapons...