"Is this Kashmir?", the 4-year old girl animatedly exclaims to her mother in a heavy American accent, looking out of the window. The pilot had just announced a descent to Srinagar, and the plane is turning sharply through the clouds towards Sheikh ul Alam Airport. I smile at her from my aisle seat, craning my neck, and secretly hoping she would reduce her coverage of the window surface area so that I can also have an eyeful view of the magnificence I've only read about in poetry and essays. My mute wishes go unheard, as she follows up with "Are you serious?" even when her mom said "Yes sweetheart, it is!". The smile on the lips of her mother blatantly gives away the fact of the lady's local upbringing in the valley, even with her Michael Kors handbag and Tag Heur watch of her apparently foreign living. She looks amused, struck by a heavy nostalgia so much so that she must've stopped breathing for those few seconds. This is the point when I get a look outside, and in an instant second, thank myself for this solo-journey almost everyone had discouraged me about.

The town of Srinagar is at a relatively lower elevation, and is almost in the center of the Kashmir Valley lying between the Greater Himalayan Range on the East and the Pir Panjal Range on the West. This keeps the town fairly warm (at almost 25-30 degrees C) during these summer months. The summer capital of Jammu & Kashmir, at first encounter, appears to be a small, almost a typical touristy place, but doesn't really seem to be teeming with as many visitors as I was expecting. "The month of Ramzan isn't really a peak season here", a local explained to me, trying to hide the prevalent disappointment of the once-booming tourism industry which progressively declined with Kashmir's increased militarisation over the past several decades.


The driver of the taxi (taxis here are mostly SUVs – a car like Toyota Innova carries you around, unless you find cheaper modes of travel) I hired from the airport took me straight to the Boulevard – the prominent stretch around Dal Lake which is the center of all tourism activities in the region. The stretch is lined by numerous hotels, houseboat directions, souvenir shops, and restaurants with kitsch signboards, and I realize that this is not the kind of location I can afford when I don't know how long I have to stay. The taxi driver senses my expression, and offers me an advice without asking – "Ye tourist-area hai sir, mehenga milega sab kuchh" (this is a tourist-area, and everything will be expensive). He then takes me to the Rajbagh area, around 3 Kms. from the Boulevard, where I manage to find a cheap hotel which rents me a fairly clean room with a small table fan, a bathroom with hot water, and a TV which doesn't seem to have a working cable connection. With a bargained deal of INR 400/- a night, I am satisfied with this dwelling for next several days I might spend here.


Abdul Rahman, the caretaker of the property is a nice little fellow with that Pashtun kind of accent, just like most Kashmiris I have talked to so far. The local dialect is Kashmiri, which is a sweet, soft-spoken tongue and makes me wonder about the kind of music which might exist in these areas. Abdul shows me the slightly shorter way to get to the lake on foot, and after a few hours of afternoon nap, I set off for the Boulevard again. The government has setup a Tourist Reception Center, which is one of the best ways to get local information and buy tickets on government buses plying to various destinations. I wait at the Center for officials – they're out for the evening namaaz – and after a while, get hold of a man who seems well rehearsed in guiding tourists on everything touristy in and around Srinagar. He asks me "How many days you've got?" as the first question, based on which he could've decided my itinerary on my behalf. Seemingly disappointed at my non-definite answer, he tells me about all places I can visit, and advices me to use the buses, as I am traveling alone, and taxis will be simply exorbitant. I buy a local map from him, and get a sense of places within Srinagar, and destinations outside. 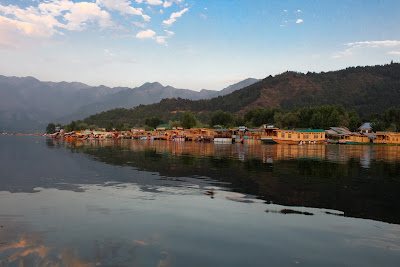 The sun is almost at level with the horizon, and casts a beautiful reflection of the orange sky into the lake below. I hire a shikara, at this golden hour between the day that was, and the night which shall slowly envelope the valley in silence. My boatman takes me on a ride through a series of houseboats decorated with bright lamps, the breathtakingly beautiful golden lake, the lotus plantations, and the lakeside markets. As the boat floats on the few inches of water visible above the strikingly viridian plantation throughout the lake below, the mind takes a break from soaking the beauty around and battles with contradictory emotions – freedom and loneliness, love and despair, excitement and fear, liberation and belonging-ness – the feeble happiness triumphs, and I start walking back towards my hotel.


It's past 8 PM, the town seems to have closed down all at once, and the only people visible are a few streetside vendors grilling sheekh-kababs. I spot a still open restaurant, and calm down my hunger with a delicious dhimpauk style nawabi biryani on the waiter's recommendation. Abdul spots me at the gate of the hotel, looks honestly relieved at once, and says "Where were you? I was worried if you lost your way or something. It isn't really dangerous out there, but I was feeling sorry I forgot to give you the address of this place when you were walking out." I ask him for a cup of tea, spend sometime chatting and sipping on the tea, get back to my room and decide to sleep after a bit of writing. I am glad I have to wake up with no timetable for tomorrow.


Posted by KV at 2:03 PM
Email ThisBlogThis!Share to TwitterShare to FacebookShare to Pinterest
Labels: Kashmir, Travel

Let's meet once u are done with this ...would love to hear the reason, the experience n the outcome

Loved it dude! waiting for more!!

Brilliant idea. Somehow missed this event on your FB. Tandon bought it up yesterday.

Write more about your experience!