The second guy is back. At his first sight, the third one hastily went out of the waiting hall. Its his turn finally. His facial expressions defying all his efforts to hide the impending ordeal which his organs are sensing, he occupies his seat on the sofa outside the interview room. Watching him nervously flipping through his certificates and documents, I casually passed him a smile; it might have helped him ease a little, I think. I was to be the fourth one.
It was to be my sixth experience of appearing before an IIM interview panel. I was relaxed; rather perfectly, I would say; allowing myself the luxury of taking small walks and a lazy cup of coffee. I have always abhorred the idea of last minute preparations. People anxiously sifting through business pages of newspapers and magazines in futile attempts at devouring as much junk as they can, discussing what-nots with each other, pounding on every person coming out of the interview room to extract as much info as they can; all these have always been a funny sight for me.
I couldn't afford to get back to the CCD next-door to this hotel as I had done in my last interview. My turn was soon to come and unable to bear the crap going on inside the waiting hall, I come out to have a chat with the guy sitting on the sofa. He is nervous, for sure, and didn't seem to be much interested in any discussion.

A man with a medium height is arranging plates on a small table outside. Slightly unproportionally built, with some extra flabs at a few places and a small moustache, he appears rather suave and humble. He neatly places cups, thermos of milk, tea bags, spoons and small plates on a tray; arranges everything to as much perfection as his rugged hands allow. Then, he places a few sugar cubes on two of the spoons with much effort, stands erect as elegantly as he can, arranges his bow tie, straightens his short waiter's jacket, getting ready for, I think, the most delicate part of his job - serving morning coffee in rooms. He casually asked me, as if delaying his departure, "Are you from Panel 2 sir?". "Yes", I replied indifferently, too engrossed in observing him. 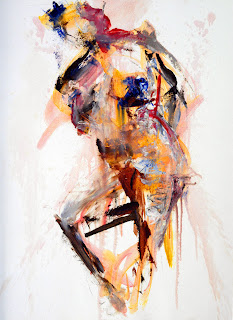 A girl comes out from Panel 4 room. White shirt, black trousers and a black waist coat - nicely dressed in this perfect business attire. I recognise her - she is the one who had occupied the seat besides me in the morning during document verification processes. She appears confident, all smiles, walks out happily; possibly because she has faired well, or might be because her last and final ordeal is over, or so I thought. I look all around once, as if assimilating her freedom and suddenly becoming conscious of my waiting state. We pass each other brief smiles.
That waiter looks at her as she walks towards the waiting hall. He still seems to be delaying his departure. "Hi mam," I hear the voice; coming back from my split-second wanderings of how I would do everything after just this final half-an-hour blah-blah gets over; and I get back to my work of observing the man. Its his voice. The waiter's. To the girl, who just came out of an IIM interview. I am still too busy in observing him to put some thought to what it actually is.
"Yes?", the girl replies, anxious, suspicious, indifferent, but still managing a smile; possibly too busy in her mind thinking about what happened inside and how fairly she might have went through the interview process. "Mam, can I have your number?", the same voice, this time quivering a little. As if a sudden jolt makes me aware. This man - clearly defying the world! His face is completely white, as if, he himself doesn't know what he is doing. Eyes all too low to convey any expression, I possibly saw some tremor in those same rugged hands which were impeccably arranging the tray I was busy observing.
"My number? What will you do?", the girl says; coming out of her interview thoughts, still expressionless, unable to take stock of the situation, but managing a forced smile. "No, no..", possibly I hear him uttering with much effort, in a trembling voice. He starts to pick up the tray, as if suddenly becoming aware of his stature. He is a poor man. How can a poor man dare to do this crime? A waiter talking to an educated high-profile girl! No, no; its impossible, it might have been a fit of madness, he probably is thinking. His expressions now turning to somewhat remorseful, I observe. Afraid, he must've been. What would happen if this girl even mentions the incident to some other higher staff in the hotel? A poor man, he is; this job is all he has. And there are thousands like him waiting in line for a position he enjoys. He is a poor man, and poor people should not have feelings, he possibly asserts to himself. Yes, he must've been mad; and he hurries with the tray to one of the rooms; not daring to look back, possibly praying in his mind to be saved, resolving to himself that he would visit the local temple daily so that his mind doesn't wander like this again. So that he manages to dedicate himself to the arranging of trays and room-services rather than resorting to such dastardly criminal acts. He rushes off.
I take a look at the sofa besides. The third guy is already gone. I missed to notice when he went inside. Its my turn next. I try to focus. I am going to be "free" soon.


Posted by KV at 12:42 AM 3 comments:
Email ThisBlogThis!Share to TwitterShare to FacebookShare to Pinterest
Labels: Experiences

Are you searching for a reason to be kind?

Following is a song by A.R. Rahman sung for Nokia India's charity project 'Pray for me, brother' which is the UN Theme song for poverty alleviation mission.
Below is the lyrics. Notice the texts in bold. I found them to be the most poignant.

Pray For Me Brother (2007)
Composed by A.R.Rahman
Lyrics by Blaaze
Singers: A.R.Rahman and Blaaze

The joy is around us But show me the love
That we must find
Are you searchin’ For a reason to be kind, to be kind…
He said… Pray for me brother

Be what you wanna be now Let’s heal the confusion
Pray for me brother Pray for me brother
I’m ashamed ah, brother be dying of poverty
when he down on his knees its only then he prays
And it’s a shame ah, brother be dying of ignorance
cos the world is a trip and everybody’s a hypocrite
Need to stop ah , taking a look at the other
I’m not ashamed of poverty
need to be making his life better
So think about it, think about it once more
cos life is a blessing and it’s not justa show, ah
Round and round the world is spinning around


Posted by KV at 1:34 AM No comments:
Email ThisBlogThis!Share to TwitterShare to FacebookShare to Pinterest
Labels: Opinions?
Newer Posts Older Posts Home
Subscribe to: Posts (Atom)