Finally doing it after chucking the thought for a trillion times! Guess its decent enough...

It was close to 7:30 p.m. in Mangalore. I had just reached the Hampankatta traffic signal from Manipal and customarily cross-checked with my travel agent about my Bangalore bound bus scheduled to depart at 10. I had plenty of time to kill and owing to my natural self, chose to roam around and have a look at a little bit of Mangalore. 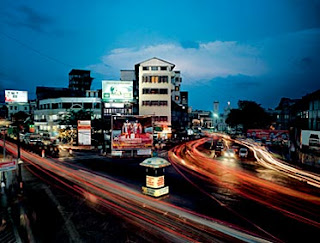 Started off with the Milagres P.U. College there itself. The four erect square buildings flanking the concrete ground on all four sides made me remember my old school. It also had a large concrete space where the morning and afternoon prayers were held. It had buildings on only three sides though.
Came out of my nostalgia and saw the Milagres Church nearby. A mass or something was going on. There was a festooned image of Christ on some sort of an altar, and a lot of people in the church campus. The lights seemed to be beautiful, the hymns being sung almost infectious. Felt like getting in, but chucked the idea and gave priority to the most important thing in my life - food! Departed off to as far as M.G. Road and subsided a bit of my hunger with some pizza at Bharath Mall's Pizza Hut. Junk food hasn't been in my favourites, but an appetite loss and bad health since last few weeks convinced me to have something of a different taste so that it can atleast go down the throat.
Saw a lot of Mangalore in the way and returned back around 9:30 to Hampankatta. The thing going on in the church had finished. People thronging the place half an hour back seemed to have been evaporated somehow. The Christ's idol seemed to be alone and the church bore a silent look, though the lights were still overlooking everything brightly. I felt like a strange pull to get inside. The guard on the front gate informed me that the timings were over. Still, I checked in from behind, there was no one at the back gate, and I got in. 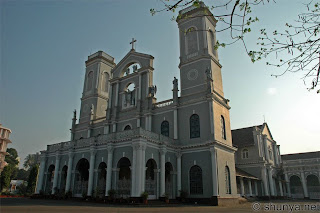 There was a strange calmness all around. No, not a graveyardy silence, but a silence which seemed to be pacifying. I roamed around, pausing at different statues of different saints, Mother Mary, Christ and others. A few candles were burning steadily near all of them, their faces sort of reflected the lights of the candles. I sat for a few minutes inside the main hall. Nobody was there, but I didn't feel alone or afraid. Rather, I just felt happy. As if, whatever I've done till date was so correct, and whatever I'm going to achieve in future is going to be so wonderful. There was peace and solace - in perfection.
I am agnostic and somewhat a nihilist. Theists would immediately say, that's what being in God's place means, being happy. I don't want to argue. The experience was good, the attraction to get in was strange, and the bottomline is, it left me happy.