Jack & Jill went up the hill

Memoirs of skiing on the Ragged Mountains in the pristine town of Camden, Maine.
I had mugged up the term 'self-motivated', amongst others, during the CV making and interview days in college. Not that I ever was. I always believed that just like most of the things in life, with almost anything to do, there are people behind who push you into it. And once you are done, they morph into the "I-told-you-so" mode, the tone of the phrase adjusted based on the outcome of what you did.
The drive up to the hills in Camden was smooth; it had snowed less than an inch last night and the plowers had done a good job on US-1 to ensure I didn't have to bother much about not having an AWD car in this part of the country. Amidst some bollywood music in the background, during the entire drive, my thoughts candidly imagined myself - wearing my duck-feather jacket on a t-shirt on a thermal inner on a vest, and a jeans on a track-pant on a thermal inner on a Jockey brief - swooshing in a perfect wave on those white mountains and fields on both sides of the road, occasionally giving a slight push on this side with the two poles in my hand, turning on that side with a slight pressure on the left toe, wavering on the hills for miles at a stretch. I didn't think about any cheerleaders waiting for me with red and yellow flags at the bottom of the hill, god promise; after all, I thought, this was a private moment, when I wasn't going to do something like those city half-marathons where your entire purpose is to get your photograph clicked and published in the weekly office newsletter - this was where I was going to do something to 'unwind' myself, for the sole purpose of enjoying it - I was kind of self-motivated, yes.
This was the only part where I actually skied.
I pulled over in the parking lot of Camden Snow Bowl. Looking at the number of cars, I congratulated myself - today must be a really good-weather day to ski; and the flashy imaginations from the drive quickly replayed in my mind.
In this country, I have learnt to be comfortable with all sorts of people unloading all sorts of sophisticated-looking equipment at all possible places. Earlier I used to get nervous at the sight of guys unloading huge kite-board sails from those giant SUVs at a lake, or surf boarders near the beaches, or mountain bikers at various trails - I've now come to terms with myself on this part - don't think too much, they are 'professionals' - helps. People around here looked the same - the elegance with which the snow-boards and skis and boots and poles were being unloaded from 'trucks', I had to pass them off as 'professionals' - helped. 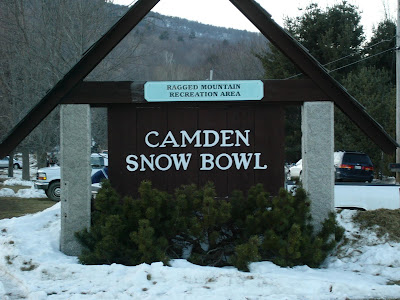