Mahé is the only west-coast district of Pondicherry which is a Union Territory consisting of four small unconnected districts. The other three, Pondicherry and Karaikal (both enclaves of Tamil Nadu) and Yanam (an enclave of Andhra Pradesh) are on the eastern coast of India.

Our 75 Km journey to this 9 Km square small picturesque town started around afternoon. With plans of witnessing a sunset over the sea, we comfortably reached Mahé by the evening. The town is small and quiet and possibly the vicinity of Kerala seems to have encroached its French colonial outlook. I was expecting a stark difference from the rest of Kerala, somewhat like Pondicherry which stands out from Tamil Nadu. Mahé isn't much different from a regular coastal town in Kerala apart from a few architectural citings and churches spawned throughout the city, which, probably, compensated towards my discontentment. 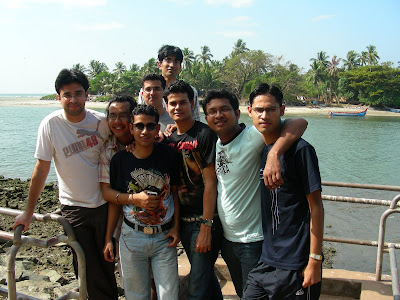 We saw the famous St. Theresa's Church from outside and decided to enter that while our return journey, though that never materialized. Our next stop was the Thalassery Fort. Around 7 Kms from Mahé, this small fort is around 300 years old. It is said to be a formidable strong hold in the past and is currently a national heritage monument. 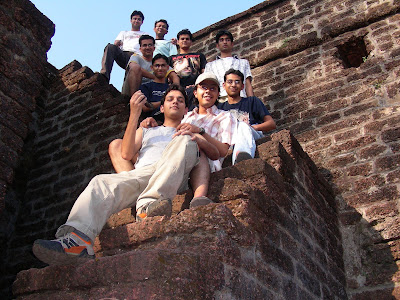 We had plans to visit the 400 years old Ramswamy Temple at Thiruvangad and the Overburys Folly in Thalassery town, but in our excitement for the sunset, we decided to head straight to the Muzhappilangad Beach instead. Muzhappilangad is 14kms from Mahé and is Kerala's only drive-in beach. The fun of sitting in the car and driving along the waves on the sand was an experience which promptly led me to the resolution of revisiting the place within a few weeks with my bike.

Black rocks protect the beach from sea currents making it largely shallow with extremely calm waves. The best beach I've ever been to, one could venture inside the water to as much as 50 to 100 mt without the water-level rising above the belly. The beach is said to be a swimmer's paradise and I'm grateful to my Goan friend who taught me the best swimming position I've ever learnt - lying lazily on the back, gazing at the sky and letting yourself float without efforts. 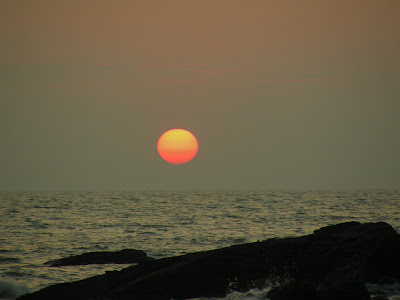 It was an experience of a lifetime, giving yourself to the majestic seas, without efforts, without filthy fights - those desperate hands and legs movements to prove yourself superior to the infinitum. A peaceful surrender - complete obedience to the vast. And then comes the beautiful part. Sleep on the waves, gaze at the other blue infinitum above, while the waters would caress you, let you play on them like a cradle, slowly and slowly drifting you to drop you at the shore! It's the vibrancy of life I felt. Let yourself flow with the waves of the uncertain future without as much as caring about drowning in them, and you lead the best existence on earth.