Here comes today's actual post. Its going to be rather long, but owing to negligible readership of my blogs, I feel I should continue with my typewriting skills without bothering much about your patience level. I regret if you have been forcefully directed here, but if you chose to, or came across this accidentally, its your luck. Recently I happened to read a TOI article about how a majority of bloggers revolve around the 'I, me, myself' syndrome in their posts rather than writing about general things. Without commenting much on it, I would just say that I am a die-hard democrat, and I usually go with the majority.
The City

Things have changed quite a lot since the previous post. I am in this Indian city called Bangalore which makes sure that every engineer being churned out of the Techy-machines throughout the country-span spends a part of his/her youth here. Managers use the term differently; for the layman called me, I would still say I am 'Bangalored' by IBM. 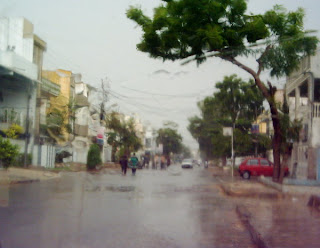 The city is small enough, end-to-end cross-drive wouldn't be of more than 25 Kms, and the excessive population (believe me, there are more engineers here compared to the number of street dogs) leaves the roads choked like North-Indian colony drains. Leaving aside the offices of MNCs in a few areas, there is nothing high-tech about the city as perceived by we poor North-Indians who just go by the usual media-manufactured oomph about Indian Silicon Valley. Here too, the traffic-policmen use hand signals when the RGY signals are out of order and leave you for a hundred bucks if you are caught flouting a traffic rule. The number of vehicles jamming the roads and consequently filling the air with as much fumes as the old engines can, betrays Bangalore's already waning claim of being a Garden City.

Once while sitting outside Riviera Food Court in my office premises in one of those rare times of partial solitude enjoying the weather (which happens to be the only great thing about this place), I had this thought of how this city is being plundered by people outside India who are bosses for the thousands of lesser-mortals working their brains-out in all these high rise buildings around me - IBM, Microsoft, Dell, Yahoo.... I am working (however little I may be) for this US client called AT & T, and similarly everyone around me for somebody or the other far across the border. They give it a beautiful name - "outsourcing", paying us in the range 15-20k. What are we supposed to do? Spend that in McDonalds' or Domino's or just in buying drinking water - a cash-back scheme of these multinationals because there is only a little fortune which you are actually spending on indigenous products or services. There was a hoarding near Koramangala signal which I read. A pretty girl saying - "Shouldn't the customer queues be reduced through automated processing?" and a caption below proudly announcing - "Hindustan Service Centre made it possible". It was about TESCO HSC. I have been in a TESCO store at Prague, they have truly unique sales ideas and they are proclaiming that many of these ideas are generated here in India. Then why aren't there any TESCO stores in India? We people are presumed to be cheap labourers. There seems to be a basic flaw somewhere amidst all this existing system, something which is the root cause of this "virtual bran-drain". Sometimes, it seems like that particular section of political activists is doing correct opposing entry of foreign firms, goods or services in the country, however criticised it is.
Professionalism, et al...

It feels good moving-in in your own rented flat, driving your own bike, sending your own money to your sister on Rakhi. It is nice being independent - yet is seems lonely out here. With only a small circle of friends in the city and a handful in office, life isn't the same it used to be. 'Professional life is going to be hard' is what seniors had told, and its only getting harder. There is a complete 'team' in office, but they are mere 'resources' - flesh and blood on skeletons, lifeless machines just working in shifts - cluck-tic-cluck-tic-cluck-tic... First of every month should apparently be the best time, when your salary is credited to your account. However, with it comes hell lot of responsibilities - pay flat rent, bike loan EMI, phone bills, this that... hell lot of everything about which I never used to bother about.

There were two experiences worth mentioning. First was when I visited a restaurant called T.G.I.F. on a senior's treat. The menu card with figures in the right column much more prominent than the alphabets on the left, people all around, drinking and enjoying; the place seemed to be mocking my status and my self. A question subconsciously settled in some corner of my mind - would I ever be able to visit this place with friends without bothering about my debit-card balance?
The second one was more thought-provoking. Sitting in this restaurant called "Firangi Paani" at The Forum, a deep thought stirred my mind. Here I am, sitting in the most exotic place I've ever seen - interiors decorated magnanimously with the "British" theme, people spending profusely to have a nice time. And there sits a beggar on the street just outside - spreading his hands infront of everybody; hunger and thirst being the only prominent enunciations of his mute eyes. I am a disbeliever of God, but is this what the master thought of? And the million-dollar question bounces back to me, unanswered since it first originated in my mind at school-level, what is it that I can do to reduce this disparity even by a minuscle.
Life

Finally justifying the title of this post towards the end. This office is a fool's paradise. The kind of work I am doing doesn't require a first class with distinction engineering qualification. Filling up data in forms and checking whether the form is responding correctly requires a sixth-grade child's effort. And yet, it is hectic and inherently boring. Anyway, I guess, its worthless bickering about all this.

Personally, I am dying to listen to some quality music. Without my comp, three-fourth of me is already dormant. Local FMs rarely diversify from regular Hindi-English concurrent worthless hip-hops to let me pacify a little with gazal, sufi, hindi classic or soft english numbers; can't even remember when I last played Madhushala. Reading is the next thing which has been marred by this job. Couldn't even finish one book since I have joined. Bangalore has one very good thing - pirated copies of excellent literature are available at every nook and corner at dirt cheap prices. I couldn't resist myself buying 5-6 titles till date but sadly am still stuck with the first one I started.

Good food is the next thing on the unavailable list.

For a person who never compromised on quality fooding, eating outside daily is a menace; that too when you are craving for a food of your choice. A subtle breakfast about a week ago at a friend's place (which she had cooked herself) seemed to be the only "food" I've had in Bangalore. I guess, I would soon start off with cooking on my own.

Loss of my cellphone has struck me at the worst place - I don't have my 350 people phonebook anymore. Remaining in contact with friends used to be my lifeline and it seems impossible to get back to everybody after this. Got a couple of good friends at office but the one with whom I used to hang around the most is leaving. It seems there won't be much charm left in office as well.

In all, life is giving me enough reasons to feel all fed-up. My own laughter seems to be artificial to me - as if I am making futile attempts to live by "looking" for reasons to be happy. I am still flowing as I used to, but its not as seamless as it was; it is all manufactured. Its not my pessimism speaking, its me; or probably I have already been engulfed by it. My creativity is being lost, my soul is becoming hollow, my "self" is dying. I badly need a rediscovery - of someone called "me".

You got some real good stuff in here man..! Second a lot of those helpless feelings u've got in there..
But life aint that bad..! so chill...
Cheers,