I don’t think I would be surprised if someone comes up to me and throws a statistic which says that 74% of the productive time of a current generation salaried employee working in one of the Tier 1 cities is spent in mulling over his / her current salary package, and over future avenues of getting an incremental benefit in the same.
I put some more thought into the phenomenon, and came up with my “Convexity Theory of Salaries”. Apparently simple, the theory propounds my idea of a mutually convex satisfaction and effort curves with incremental salaries. The following figure explains the theory in some detail: 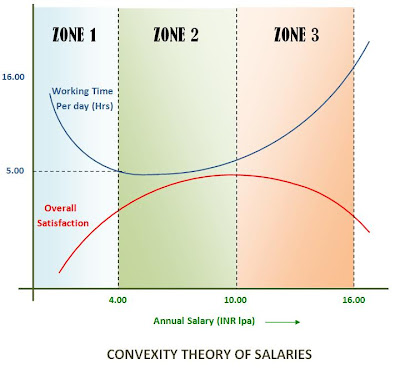 Any Tier 1 city employee can be classified into one of the three zones at various stages of his / her life. Different zones have been segregated based on salary ranges, and a creature falling in one zone has characteristics totally distinct from creatures in other zones. In addition, a creature in a lower zone would almost always strive / crib to jump to a higher one.

Zone One incumbents spend a large chunk of their time in office. Their work includes mundane jobs, generally of a repetitive nature. They might attend late night calls (support work), verify and document processes (Ctrl + C/V work), spend time on Orkut, YouTube, Monster and Naukri, ensure that the coffee vending machines and smoking zones in the office reach their optimum utilization, and tweak something or the other in their CVs for a few minutes as a daily routine. They are good at narrating stories in their families about how their work at an MNC keeps them busy for more than 12 hours a day but because of a centrally air-conditioned office building and a personalized cubicle, at least the job is satisfactory. However, they are of the most unsatisfactory lot and are proud contributors to the largest bulk of CV movements across job consultancies in various cities. They spend at least one weekend per month participating in recruitment processes for jobs which might elevate them to Zone Two.
ZONE 2 – The Aspirant

Zone Two incumbents are of the ambitious lot. Their office timings become a comfortable 9 to 6 and their work generally involves low-value-add-to-the-company endeavors. They might write codes for small fragments of larger applications, search the net working as analysts sniffing for data, appear for certifications, or jugaado for onsite opportunities. A few towards the right (light green) portion of this zone might actually work on something which might positively contribute to company’s bottom-line and are the cause of envy for their peers on the last day of each month. With their sufficient income levels, Zone Two’ers can afford 2-BHK flats on a twin-sharing basis rather than those Paying Guest (PG) arrangements of Zone One mortals. They even pay the EMIs of their two-wheelers from their own salaries and are the largest contributors to the Friday night crowd at city pubs and restaurants. Some of them start fitness routines and Yoga for the purpose of telling about the same to office colleagues. Their CVs are normally stagnated and a majority of them start attending classes for management entrance examinations on weekends. Even though they are at the vertex of the satisfaction convex, their aspirations keep them cribbing for a slot in Zone Three without anticipating the disaster.
ZONE 3 – The Fallbacks

Zone Three incumbents are classic portrayals of grandma’s greed-is-a-dangerous-evil. They are the fallen back Zone Two’ers normally with a one or two year management education interspersed in between. They spend the maximum time in office working upon presentations which would eventually attract partners’ and clients’ brickbats, excel maintenance for resource allocation, team meetings etc. Their discussion topics amongst office colleagues witness a paradigm shift from Zone Two’ers talks about girls, boss-cribbings, PVR movies and new cellphones in the market to Zone Three thoughts on entrepreneurship and related gassings, plans for apartment purchases, investments etc. Their Orkut albums are replete with their international stints and other sweet memories of Zone Two days and usually a with-my-team snap from their first few days at Zone Three tragedy. Their working hours, stretching to the better portion of twenty four, put them towards the tail end of the satisfaction convex into a situation which their last-day of the month creditings in the bank cannot compensate. It’s already too late for them to get back to the previous two zones and quite a few of them, feeling retired towards their middle age itself, start watching fatso babas on dhaarmik TV channels giving gyaan about life.

Zone Two, according to the Convexity Theory is the Utopia of human existence. It does not take much effort for an average employee to enter this zone and enjoy weekend trips and Friday dinners. A slightly focused strategy can even place most of them towards the right end of this zone which offers comfortable salaries coupled with a relaxed lifestyle. However, the mere attraction to cross the boundary proves lethal.
“Sometimes the majority only means that all the fools are on the same side.” Think before you play ping-pong within these zones.


Posted by KV at 11:32 PM
Email ThisBlogThis!Share to TwitterShare to FacebookShare to Pinterest
Labels: Humour, Thoughts

KV...I think the key is the width of these zones...I don't think the width is fixed, it's upto us keep on increasing the width of Zone 2 by doing rounds of self-introspection and being aware of what our priorities are.

Truly mindblowing, but truth of life is that, grass always appear greener on the other side. No amount of confessions from Tier 3 ppl can stop Tier 2 from striving to break into the next level. Let everyone learn form his/her experiences. This is the beauty of life when it's summer man wants i winter and when it's winter man wants it summer. Marvellous piece.