Another Boeing 737, on its way into the Tribhuvan International Airport, hovers in the clouds, playing hide and seek above the bowl-shaped valley enclosed in mountains. Flying on a clear summer day like this, when the streams are all dry, one can witness the numerous meanderings of countless serpentine rivers which spawn this part of the Himalayan foothills. There are so many of these yellow ochre patterns on earth, that it seems like the hands of some creative yarn dyer have carelessly thrown bits and pieces of silk threads on a green canvas. As if complimenting these natural designs, almost all of these hills are lined by man-made earthen roads moving up in elliptical paths to the mountain tops – those small, flat patches of land with tiny wooden houses surrounded by terrace cultivations of the local crop.

Stepping out of the airport and driving a little bit into the city, one is greeted at once by the noise and pollution of a thriving, but rickety metropolis – a city which is thousands of years old, which has almost been kept preserved by the hills all around, and which now seems crumbling with the weight of a teeming populace, haphazard new construction, bustling number of motored vehicles, and an ever increasing commercial activity. The numerous old monuments, monasteries, temples and trekking paradise around the valley serve as an attractive beehive for tourists all over the globe, and keep the city alive despite all the mayhem mostly due to the lack of effective governance. My cab driver, an old man driving a 30 year old rickety Toyota, laments about the days when the kings used to rule, and everything was much better. The reference undoubtedly is to the period before 2001's infamous regicide, after which the Maoist insurgency found a new foothold in the kingdom, slowly leading to a complete abolition of monarchy in Nepal a few years later. Discounting for the nostalgia-driven exaggeration of 'good-old days' by this man, I could still notice that the capital of this beautiful nation could well, have done better!

My sleepover for the night is going to be in a budget hotel in Chhetrapati, Thamel – an old part of town which boasts of the iconic Durbar Square, a UNESCO Heritage Site housing the Kasthamandap temple after which this city is named. The Square is surrounded by palaces of old rulers, courtyards and temples; and is a vivid concoction of what is called the Newari architectural style – structures with elaborate carvings, delicate paintings, and low, narrow doors and pathways. Durbar Square is also a busy local market today, with tiny vegetable shops and numerous snack places selling momos, fish, and other local delicacies. It is thronged by tourists, considering it is probably the best way to soak-in the hyper-activity of people, animals, motorbikes and vendors in this world – sitting on a place high atop one of the temple stairs and sipping the local tea. I'm here on the day of Seto Machhindranath jatra, a chariot procession by the ethnic Newar community to please the God of rain, and I also get to witness countless devotees moving through the Square dancing on drum beats. 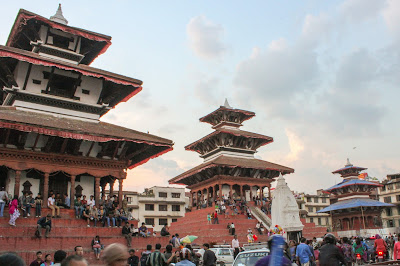 More than 80% of Nepalis are Hindus, followed by the Buddhists and other communities. Situated on the eastern part of Kathmandu is the the temple of Lord Pashupatinath, one of the most auspicious Hindu temples in world. Its current pagoda-style main structure was built in the 17th century, but the temple itself dates back to more than two thousand years. As I enter the Pashupatinath compound, I am greeted by a not-so-pleasant sign – "Only Hindus allowed inside the temple premises." The compound is thronged by believers, and houses numerous small temples other than the central structure lined in gold and silver. Towards the back of the compound flows a small stream of river Bagmati, the banks of which also serve as a cremation ground. This mystical sight presents a beautiful philosophical quagmire – inside the four walls of the compound are thousands of men and women praying for their health and a long, happy life; while outside lies the ground extinguishing minds and bodies and physical forms into flames.

Another to-be-checked tourist attraction, the Boudha Stupa lies just a few miles north of the Pashupatinath temple. Built around fifteen hundred years ago, this is a tall structure symbolic of peace. The Stupa has the characteristic Buddhist prayer wheels on its entire periphery. It is believed that rotating these wheels is equivalent to reciting the six syllable Sanskrit mantra carved on them in Tibetan – "Om mani padme hum," roughly meaning "May I achieve purity, compassion, and wisdom." It is surrounded by small shops selling artifacts and other souvenirs causing quite a hustle-bustle, which seems a little uncharacteristic for a Buddhist structure – reducing it from a monument of tranquility and peace, to a largely commercial hobnob. 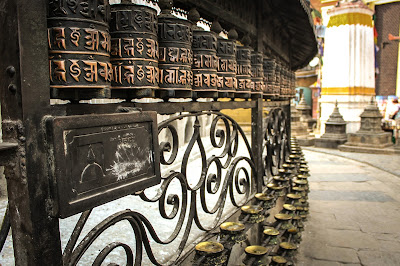 Getting around Kathmandu isn't very easy – the local taxis are generally expensive for the distance they travel and mostly do not use meters. The city itself has very narrow, rough, and often hilly roads leading to frequent traffic snarls. My next destination is Swayambhunath situated in the far west of the valley, right across the city from where I am – a long, drowsy ride away. My last meal was quite a while ago – an early lunch of traditional daal-bhaat-tarkaari, or the assortment of rice, pulses and vegetable curry which forms the staple twice-a-day meal of the Nepalese people. Before climbing up the stairs of Swayambhunath, I subside a little of my evening hunger pangs through 'chatpati', a spicy concoction made of puffed rice and a few other ingredients.

Swayambhu, the Monkey Temple, is an ancient complex housing stupa, temples and monasteries from an erstwhile era. Being at the top of a mountain, it also serves as an excellent viewpoint to witness the sprawling Kathmandu valley. In contrast to the Boudha Stupa, Swayambhu is markedly peaceful, and does not have 'hard-selling' stores looking out for travelers. Lighting one of the ghee lamps near the shrines could be an elevating experience, truly enlivening one's spirits. Inside the Dongak Chhyoling Old Monastery, I find hundreds of these lamps being lit up, rendering a rather mystic touch to the whole setting. Witnessing the small monks at the monastery give an indication of the stunningly simple pace of life in these pockets of culture, and more than justifies the occasional escape from rather mundane, fast-paced existence of the 'modern' world. 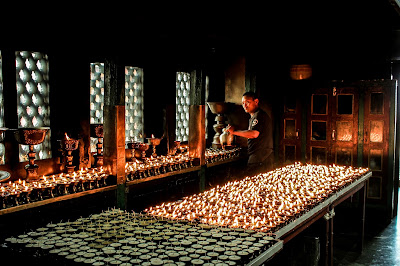 After a tiring day spent in this gateway to Nepal, I settle for a relaxed meal of Thupka and Momos in a small, cozy restaurant in the Thamel marketplace. Tomorrow is going to be another day of surprises and discoveries in this small, landlocked nation which owns the Himalayas.


Posted by KV at 2:11 PM
Email ThisBlogThis!Share to TwitterShare to FacebookShare to Pinterest
Labels: Nepal, Travel

Very vivid narrative. The ones that are only possible from a solo trip.
But, a trip becomes an experience only on companioned sojourns.. and might i say, a tad more interesting as well ;)