A book which speaks

I happened to go through "Out Of My Mind - A flight into the realm of thought and spirit" by Richard Bach. A great book on self-discovery. An inspiration towards hope, joy and wonder in oneself. I had read Bach before in "Jonathan Livingston Seagull" and "Illusions - The confessions of a reluctant messiah". Jonathan was a marvellous creation. And then this one. It literally speaks out my feelings: the profuse imaginations of my heart and above all - hope. 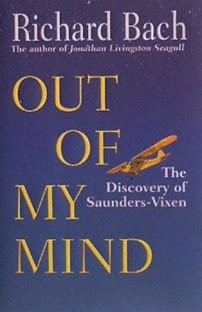 A paragraph says : "Everything is exactly as it is for a reason. The crumb is on our table not only as a reminder of this morning's cookie, it is there because we have chosen not to remove it. No exceptions. Everything has a reason, and the tiniest detail is a clue."

A little later, it is said : "The design exists, Richard, the possiblity of just this combination of elements in just these relationships, the design for this machine existed at the very instant that spacetime began. Whoever first draws the plans gets to call it whatever they want to call it. Every world has its own laws and ideas about who owns what, they're mostly different."

In essence, it simply turns out to be that nobody owns anything, its just that this world believes that you own it. And if you have read Illusions, the it mentioned in the last line is nothing but an illusion!


Posted by KV at 4:28 AM
Email ThisBlogThis!Share to TwitterShare to FacebookShare to Pinterest
Labels: Thoughts