Its not a very good practice to start off with a pessimistic note, but I am more than tempted to write this off - If you are a vegetarian, think ten times before travelling abroad without an alternative food arrangement (like your wife to cook!) I have been pissed off with what all you get here in the name of food: tell that to somebody back in India and he would exclaim - sirf ghaans khaate the kya? For vegetarians, they proudly announce the salad on one side of the buffet which was filled up with strange dishes of pork and beef (for which I needed a friend for identification) or some ugly vegetables cooked with ... I don't know what. Yesterday in lunch, they even had the pasta which actually sucked! I have been hungry since last three days, surviving only on the bread-butter and yoghurt of the breakfast and moving only by the little power provided with that 32 Crown Coca-Cola Burn energy drink.
The conference is going on great - though a bit hectic. Today was the closing ceremony in fact. It has been great chatting with people from around the world - each one strange in his own ways. The day before yesterday I talked with a guy called Bill from Hungary. He had been to India for 6 months all alone and was sharing some experiences. He had arrived at Mumbai on a Diwali night and was astonished at the sight of crackers all around. It was funny in a way, I could imagine him jumping and running all along to get away! There is a girl called Louann from Trinidad with this typical accent we seldom hear on televisions and this lad named Achala from Sri Lanka who finds the Indian accent strange! Writing about everybody is not what I intend to do in this space. 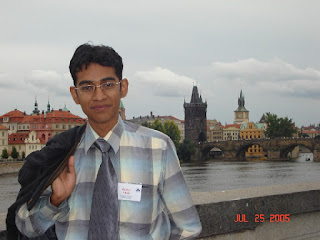 I bunked a complete session yesterday afternoon and roamed around the city with a fellow Indian Ashish Gupta from XIMB (Yup! Bunking is something which characterises a typical Indian, and is inevitable when you are an engineer!) This guy was experienced - he had been to London and Japan before and knew the ground rules of travelling in an unknown city. I think I would never have been able to cover all these beautiful places in Prague, had he not been there for my rescue. With a map in hand and a good knowledge about the city owing to his huge pre-preparations about the place on the internet before coming, he was a nice company all around. We went to almost all places he told was worth visiting - Prague Castle, Charles Bridge, Old Town Square, Wencelas Square, National Museum etc.

There are a few basics to enjoy a foreign city - have an extreme stamina to walk, a great sense of direction and a lot of common sense! We walked for almost 15 Kms on that very day, and I kept myself moving with frequent Coca-Cola Burns. The city is great - and I have read that it has some historical importance related with the USSR times. Christened the Banaras of the West and the most beautiful city of Europe; we roamed quite until it was 11:30 in the night. Its strange of European summers - the sun comes up around 5 in the morning, but sets only around 11 in the night! The night had actually just started to cover up the Prague skyline when we decided to wrap off to catch the last train to Celakovice.

And ask what I had for dinner - a cheese patties bought outside the TESCO Supermarket. After searching in almost every McDonald's and other restaurants and asking for anything vegetarian, I finally got a patties! Ashish was, though, comfortable with his hot-dogs and burgers (which had pork inside.... Erckle!). I had to buy water (available at a hefty 26 Crowns for half a litre - that's around 50 Rupees!) to quench my thirst just because they don't offer it for free even at restaurants! The coke was cheaper than water, though, available at 15 Crowns for a glass and I had sipped it twice.

On returning back, every other guy in my group was astonished how I bunked a session, and I was astonished why at all do they think its such a big deal anyway! Today evening, there was a scheduled city visit and we utilised it only to do some shopping from the stores we had cautiously set aside in our minds yesterday as providing the best prices - again, a typical Indian!

Today was the closing ceremony and it felt bad to part from everybody else. After all, it was a nice share of time which I had enjoyed with them. Tomorrow, I would be leaving this place to ride on plane which would "Fly me home" (The three words symbolising the Deccan airways which I read on a girl's baggage while looking at her at Paris airport!) Better than here, atleast I would get good food to eat and free water to drink!


Posted by KV at 3:06 PM
Email ThisBlogThis!Share to TwitterShare to FacebookShare to Pinterest
Labels: Travel