Travelogue IV (Day out at Paris)

Its rare I get lucky! But it happened. Getting an entire day out at Paris, all that for free, is not just a small luck, its a gift chhappar phaad ke! After landing at the high-tech Paris airport, when I reached the appropriate terminal to get a boarding pass at the Air France counter for my journey back to Mumbai, I was baffled by the reply of the staff - "All seats in this flight are full and you can't travel today. Wait on that side and I would tell you what is to be done." Still unaware of many rules in hawaai yatras, I ranted at her - "How can you give my seat to somebody else? I have a confirmed ticket!" She politely replied - "Sir, do you know what's going on in Mumbai? People are dying in Mumbai!" I thought for a moment, so what's the big deal? People keep on dying in India due to one thing or the other!...but suppressed my urge to say that out aloud. She continued - "There is water all around and our flights are not getting permission to land. Yesterday's flight was cancelled and those passengers are travelling today." Finally, after spending much time on her sleek computer system, she told me that there is no other option and I would have to travel the next day. They arranged for my stay at a nice hotel together with meals and had a free transport available from airport to Ibis Ville.
I only had my hand baggage with me and there was no option of changing my clothes. After having lunch (this was much better than Czech food, atleast the fruits were intact and not spoiled with the application of a ghatiya fruit salad recipe, and on the top of it, there were those familiar french fries!), I decided to set out to have a city visit. With the experiences of a city travel in Prague, I took a map and set out all alone to discover as much of Paris as possible in that single evening I had. Major tourist destinations were marked on the map itself and I covered around 5 of them. 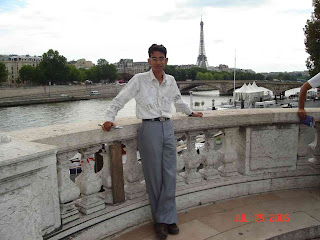 My first stop was, of course, the Eiffel Tower. The familiar picture of the structure embedded in every child's mind in India, courtesy his GK books, was infront of my eyes. You can't really imagine the actual span of this marvellous design unless you see it. I decided not to go on top (partly because I didn't have time, and partly because there was a heavy rush at that 2 Euro elevator and I didn't have enough energy to waste by using the stairs). Paris was expensive, and I was lucky that I had around 5000 Rs in my hand baggage which I got converted at the airport.

From the tower, I decided to walk to my next destination to have a good sightseeing and to enjoy the beautiful Seine river. The river flows centrally through the city and is flanked by huge structures on both sides. It's not very wide, but the approximate 50 to 60 mts. width is enough for the numerous floating restaurants and small tourist boats offering a paradise to the onlooker's eyes. Paris is different from Prague in almost everything - it's modern and high-tech, Prague was a bit ancient and historical.

After a few more site visits until it was around 10 in the night, I decided to move back to my hotel. A sumptuous dinner (again with French fries, French bread, lots of fruits and above all: the red wine) ended my Paris day-out.