"Once upon a time dawned on this earth a man with ..."
The saga of Mangal Pandey depicted in the latest film portrays his rebellion against the East India Co. with all the required spirit and literary style. Aamir Khan has done justice with this elusive character who enlightened the torch of India's first freedom struggle. 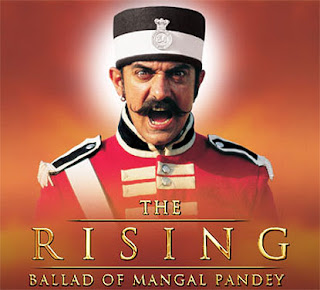 I found the movie to be conveying much more than just the story of Mangal. It kept on depicting in the background India's medieval society with all its existing dogmas. The untouchable lower caste people, the girls being sold from one hand to another and finally ending up as prostitutes, the sati system ... This complete framework on which the strings of the film are knit hurt you somewhere in the heart. All these things existed in our own country in the middle of 19th century, and we still can't claim that they have been completely wiped out.

Nobody is perfect. And neither was Mangal. He never touched the sweeper in the street because he was from lower caste and his entire transformation into a freedom fighter from a loyal English sepoy was due to cartridges which used skins of pigs and cows and this was against his religious beliefs. But, it's the brighter side we should ponder upon. He was the one-man-army who motivated the entire 34 regiment at Barrackpore to fight against the Britishers. He sets himself apart as an epitome of bravery when he stands all alone infront of the entire Rangoon regiment and once again by shouting 'Halla-Bol' just before he was to be hanged.

Another interesting character in the film is that of Gordan who is shown to be in an internal tug of war between his friendship and his loyalty. The concluding notes in the film where it is said that he was finally fighting against the East India Co. after the death of Mangal is worth noting.

Overall the film is sure to impart a poignant effect on your mind and heart.


Posted by KV at 1:52 PM
Email ThisBlogThis!Share to TwitterShare to FacebookShare to Pinterest
Labels: Thoughts