"Das war ein Vorspiel nur, dort wo man Bücher
Verbrennt, verbrennt man auch am Ende Menschen"
(That was but a prelude; where they burn books, they will in the end also burn people.)


These stirring words stare from a brass plaque placed near the memorial on Bebelplatz, a large square in the middle of Berlin. This memorial consisting of empty bookshelves under the ground was built as a poignant reminder of the day when student groups collected more than 20,000 books from different libraries in the city and burnt them in this very square on 10 May, 1933, apparently as “Action against the Un-German Spirit" and “cleansing” by fire. When Heine wrote these words, Germany was yet to witness its most historic decades that completely altered the fabric of its society. And his words, like those of all those genius littérateurs in history who could accurately discern the metaphysical human tissue with their pens, came as true in Germany as anywhere else in the world.

Remnants of the World Wars present themselves as stoically in Berlin as in most of the historic cities in the European subcontinent that suffered the ravages of battles fought by men at this historically unprecedented scale. A major part of Berlin was destroyed in the 1945 battle, following which the city was butchered horizontally and vertically into four. The local populace, largely homogenous as left over by the Nazis, suddenly found itself being ruled by US, UK, and French capitalists on every street in the west, and by the Soviet socialists on the east. And when they tried to choose one over the other, Moscow erected the 150 Km concrete wall with shoot-at-sight orders for anyone trying to cross over. Taking a walk on the East Side Gallery, the 1.3 Km stretch of the Berlin Wall that survives today makes one wonder how drastically life would have changed overnight for the residents of this land: waking up one fine day, and suddenly finding oneself unable to walk to the other side of town where your aunt lives. For thirty years.

Modern day Berlin is the most startling city I have seen in Europe. A sprawling young metropolis, Berlin clocks time as if it were an unpredictable, but endearing orchestra, playing symbolically from its Philharmonie. It preserves its classical notes of history, both old and recent, as much as it can. There are those tenors conveying the grandiose of the German Empire, as well as those sombre basses of the Nazi atrocities. And then it also offers the cheerful baritone and an infectious energy that is constantly discovering and defining the character of a merely 25-year old city.

On one hand are the castles at Potsdam and Schwerin, not too far from Berlin, which present a glimpse into the royal past. Most of the monuments in Potsdam are from the times of the much revered King Frederick the Great of Prussia, a ruler fond of music and arts. In his Sanssouci palace I saw magnificent rooms with different themes, decorated with paintings, silk hangings, sculptures, furniture, porcelain vases, and every possible piece of beauty brought from different parts of the world or created by some of the finest craftsmen of their time. Schwerin palace, situated on an island in the Schweriner See lake, was a feast for the eyes - a beautiful example of revival architecture. Within Berlin itself lies the museum island, a world heritage site consisting of four museums, the Lustgarten park and the Berlin Cathedral that offer a soothing area for a stroll. 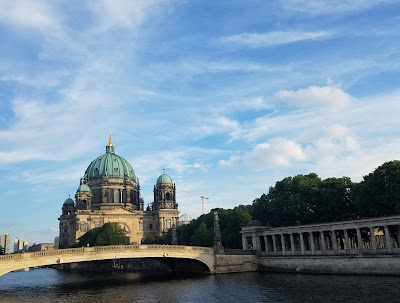 On the other hand are the impressions of numerous known and unknown artists who paint the ruins as well as the underbellies of Berlin's modern structures with the world's most famous graffiti. On a beautiful sunny evening, I climbed up to the Teufelsberg hill with a beer in hand, a location that once was the base of a spy station used by the US National Security Agency (NSA) during the cold war (thanks to the Germans that one can drink in public). The dark leftovers of the abandoned station today host brilliant graffiti work - some more poignant than the images painted on the Berlin Wall itself. It is here where the world can feel both doomed and resurrected at the same time: there are artworks that scream out to save the world from war and destruction, and ones that show the brighter side of a life of freedom. The almost teenaged quirkiness of Berlin doesn't end here. What's even more alluring is a whole airport from the Nazi era replete with a passenger terminal and runways at Tempelhof in the middle of the city that Berlin just decided to abandon. Today, Tempelhof could easily be the largest possible public recreation area in the world where summer evenings see a horde of cyclists, picnickers, couples, and often barbecues and concerts on the flat grass and runways. 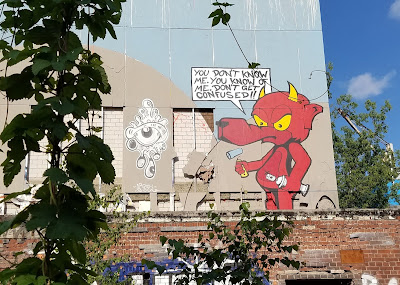 Berlin's tryst with rediscovery is most visible in the upcoming areas of Kreuzberg that host modern eateries, bars and sheesha places and where its young often hang out. I sampled what could classify as the most authentic Neapolitan pizza at Zola, courtesy my generous host at Berlin who rightly claims that hers is a city like no other and it's impossible to understand Berlin's evolving culture even after staying here for months. An evening at a local bar with a bunch of young city dwellers reinforces this feeling of permanent transience in Berlin's air.

My previous destinations in the Baltics and Poland seemed to boldly offer a platter of symbolism depicting the cruel destructions of the war and almost forcibly eliciting an instant empathy. Berlin, on the contrary, seems to constantly struggle in dealing with its vicissitudes of the previous century, like a teenager struggling to make peace with herself. Nationalism is subdued in Germany, visible only occasionally and diffidently, such as in the Germany vs Northern Ireland football game of the 2016 UEFA European Championship that happened this week. It's probably one of the fewer instances when cries of "Deutschland!" roar amongst the rambunctious young who gather for the live public screening of the game at Brandenburger Tor. It feels like history is available in Berlin for the tourist-mind to see and infer, not force-fed like elsewhere. The Berlin Wall exists, and the stark difference between the buildings on both sides of the wall also exists for one to notice. But there is no old town with cobbled streets thrusting history and European charm in your face, until you leave Berlin and go to one of its historic suburbs. The reminders of the Nazi history also exist, as a poignant Holocaust memorial in the center of Berlin, as well as the dreadful remains of the Sachsenhausen concentration camp 35 km away. But one is free to choose: to either get burdened by the sins of the past, or to look forward to the effusive creation of a city by its young.

On a cheerful note, I thoroughly enjoyed the bratwurst curry, probably the only food item that can be called 'German', consisting of sausages sliced and topped with a generous portion of mildly spicy ketchup and curry powder. Berlin also has a large population of Turks, and the ubiquitous street-side 'Kebap' shops sell, amongst other things, the delectable dürüm döner; essentially a shawarma wrap with veggies and meat. A day trip to the beautiful port of Rostock offered me further gastronomic explorations, specifically into fresh seafood coupled with beach-side beer. 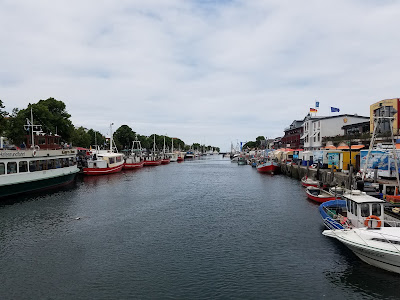 Moving around Berlin is fairly easy with a highly dense public transport network consisting of regional trains, S and U Bahns, trams, metros, and buses. It is on one of these train stations that I was discreetly asked - "hey, you want some weed?" I later found out that legality of cannabis smoking in Germany falls under grey areas of the law, and possession of “small amounts” for personal use generally does not lead to prosecution (thanks to the Germans once again). Relics of the soviet era are another delight to watch in the city. There are a bunch of tourists driving around the Trabant, arguably one of the worsts cars in the world designed by the former East Germany that's now offered painted with bright colorful stripes by the Trabi museum for a self-drive. Tourists still pay to get fake visas of the erstwhile German Democratic Republic on their passports at Berlin's Checkpoint Charlie, the infamous gate where fully armed US and Soviet tanks had a weeklong stand-off during the cold war; one cannon even mistakenly fired would have escalated the world into a third war of absolute annihilation. And then there is Markthalle Neun, one of the thirteen city markets of Berlin that survives until today after 125 years. I visited the market on a Wednesday only to get disappointed; apparently it's not the day of the week when this market is setup as a warehouse of street food stalls with culinary delicacies and freshly brewed beer.

I could see today's Berlin as a pliant teenager with one foot planted on each side of its own symbolic wall - on one side is its difficult past, and on the other side is the cautiously optimistic mêlée of the present. The city itself is hesitantly taking strides, as if drifting away from both its past and the present to an altogether new identity whose demarcations are unknown. And it is precisely this celebration of transience that makes it so desirous a city to actually live in, instead of merely traveling to.

Posted by KV at 9:39 AM
Email ThisBlogThis!Share to TwitterShare to FacebookShare to Pinterest
Labels: Europe, Travel
Location: Berlin, Germany