"Buses to anywhere at this time?" is the question I ask at the TRC at about 8:30 in the morning. "Gulmarg and Pahalgam, the one to Pahalgam about to leave" is the reply I get. The decision for the day is made.

Pahalgam is a small village in the Lidder Valley at the foothills of the Greater Himalayan Range. The 98 Km journey to Pahalgam from Srinagar looks rather interesting on a map. The bus takes you south on National Highway 1-A via Pampore and Awantipora, to Anantnag – which is almost the mid-point of the journey – and then up north again through a mountaineous terrain to Pahalgam. Further north into the Himalayas are the Amarnath Caves, for which Pahalgam also serves as the base camp. The road is heavy on traffic till you are on the National Highway upto Anantnag ("Nag", by the way, is the local name for various springs found in Kashmir. Vasaknag, located in the Kund Valley near the northern foothills of the Pir Panjal Range in Anantnag district itself is one of the most beautiful springs on my 'hopefully-to-be-covered' list).

As the bus turns left at Anantnag into the Himalayan terrain, there is a sudden change in the scenary around. The road becomes narrower and curvy with sharp bends, truck-heavy traffic gives way to small local buses and SUVs, the Himalayan Range comes into view, and the beautiful white stream of river Lidder flowing noisily on a rocky bed accompanies the road throughout the journey uphill. The air has a pleasant smell largely due to saffron plantations on a large chunk of land along the way, in addition to many other spices which are grown in the valley. The region is known for the production of world's best saffron, walnut, varieties of dry fruits, and apples.

After almost three and a half hours of journey, the bus reaches Pahalgam. The stream of Lidder has broadened into a small river with clear waters, and as I disembark the bus, the sheer might of the Himalayan panorama strikes me with awe. There is a breathtaking view of Kashmir Valley on the west side of the road, while the Himalayan Range lies on the east. Here, one can hire one of the numerous horses which take you further up the hills to Dabian and Baisaran. Lake Tulian – with its famous yellow coloured waters – lies almost at the top of the mountain, and can be explored by trekkers. These summer green, cloud capped Himalayan peaks are hammered with as much as 10 feet of snow during winter months, and Pahalgam then converts into a skiing destination with sledge-carts going up and down the hills. 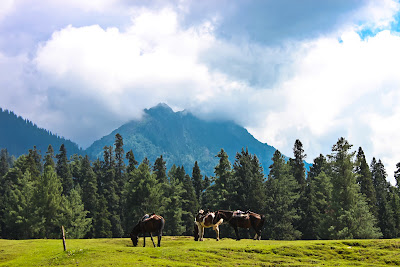 I rent a horse named Veeru by its owners, and my guide is Irshad, a small and thin, but apparently strong young man living in a nearby village. The horse takes me up the hill, while Irshad walks by, navigating the animal. It takes a little while to adjust to a horse-ride – the tracks ahead made up of large boulders, swamps, water streams, trees, and inclines of as much as 75 degrees look non-negotiable even on foot, and the horse trodding on such narrow paths and steep inclines almost scares me. I wonder at the built of people like Irshad, who climb up and down these hills multiple times during the day. When we get to Dabian, Irshad shows me a better view of the Kashmir Valley and tells me about the local plantation consisting of walnuts, apples, and on further prodding, of cannabis – a plant whose resin is used to make charas. The production of charas flourishes secretively in the valley with the greasing of all relevant hands, and is an important cash crop.

Further up the hill, we reach Baisaran, a flat portion of the mountain which the locals affectionately call "mini-Switzerland". There's hardly anything Swiss about the alpine trees and the carpet of grass around, but the place is pristine in its calm beauty. Small shops sell some eatables in this area developed as a park, and I spend some time lazing around and munching a plate of maggi served hot. On our journey downhill, I chat with Irshad further about the local occupation. I learn about certain nomadic tribes living on these hills, the locals with small businesses in various nearby markets, and the plantation owners. Irshad himself is the youngest of three sons of a tailor ("darzi master", as he calls him) who owns this horse. The locals use horses for their day-to-day chores as well as for hunting ("Rooz" is a cat-like animal with highly energetic meat, hunted on these hills), and during summers, they also serve as rides for tourists. Riding down the hills is scarier than the uphill ride – the almost vertical inclines give you a feeling that the horse is going to skid at any time. Irshad gives me a helpful tip – look at the mountains around, rather than looking down at the horse, and you won't be scared.

The sun is slowly coming down as we reach the base, and I note the letters "Welcome to the Heavenly Lidder Valley" on a signboard for tourists. The noise of the Lidder is more prominent now, and I take a power nap on the grass in a small park by the river, before getting on the bus back to Srinagar. The bus once again drives along the river, the white waters now show a reflection of the mountains in the orange light of the sun, and I again think of just how much beauty this place has, free to be absorbed.


Posted by KV at 2:03 PM
Email ThisBlogThis!Share to TwitterShare to FacebookShare to Pinterest
Labels: Kashmir, Travel

My mom and masi had visited Kashmir when they were 15. There's a famous Pahalgam story in the family- the horse carrying masi had slipped and she'd tumbled over. Was saved in the most heroic fashion too. Your post brings a smile and the many stories of Kashmir I grew up with. Keep writing!

Irshad ka Veeru :) The post almost takes one thru the trip.

@Anonymous 1:
Haah, guess I was luckier then, with no incidents to credit! Or Veeru was one of the smarter ones. Irshad was insisting on the fact that it is the tallest horse in the region, and is a little rowdy, because he is only two years old. :)
And oh, the Pahalgam story in my family is narrated by some polaroid picture printed on a thick card which was popular in the early 80s, a time when neither me nor my elder sister were born. It's a picture of my mom and dad in that Kashmiri Pheran, and they say it used to be some sort of an 'instant camera' which used to produce pictures right at the spot, without the use of negatives. I was looking for any guy with an instant camera around in Baisaran, didn't find one! :)