It's a cloudy day in Srinagar, literally, the 'venerable city'. I have woken up quite late, and am ready to get out only by 10:30 AM. Weather forecasts tell me a 50% chance of rains until 2 PM, and I interpret it as one of the best days to walk around the city. Arming myself with the college day attire of a pair of jeans, bright coloured kurta, and a pair of hawai chappals, I set off on foot following the detailed map which I'd got from the TRC.

My first stop is for food. A concoction of hunger pangs, detailed descriptions of Kashmiri cuisine which I've been reading up on, and an unmistakable smell of spices I've been subjecting myself to over last two days, deserve an immediate consumption of a delectable brunch. I walk to the Mughal Darbar, a heavily recommended restaurant on the Residency Road in old city, and ask for a Rogan Josh with rice (being in Kashmir and not eating meat is like going for a movie without popcorn – don't ask any further disturbing questions.) The food is so much, and tastes so good, that I stuff myself up to the brim, with no space for dessert, and promise myself a serving of phirni for dinner.

Resisting the temptation of going back to the hotel and sleeping off for a while after eating that much, I prod along towards Lal Chowk. Apart from being a central marketplace, this city square has been the hallmark of political activities for a long time. One of the key events in the history of this place dates back to 1948, when an open referendum on the political fate of Kashmir was promised to the Kashmiri populace by Jawaharlal Nehru in an inspiring speech standing beside Sheikh Abdullah, a prominent leader in Kashmir who was a proponent of the region's self-rule, and who had led the agitation against Maharaja Hari Singh, the reigning monarch of Kashmir from 1925 till India's independence. The promised referendum never happened, and the valley forever remained a disputed land. Two years ago, the security forces banned hoisting of the tricolour at Lal Chowk to prevent needless provocation of the separatist and extremist elements in the area.

Political history kept aside, Lal Chowk and the nearby areas, including Maharaja Bajar, is a teeming marketplace. The labyrinthine alleys and even the wider roads are almost completely claimed by roadside vendors, and walking in this mass of humanity in itself is an experience. The streets are filled with sellers of small artefacts, toys, spices, clothes, jewellery etc. and the place has a typical Central Asian air to it.

I walk further along the river Vitasta, present day Jhelum, which flows through the city. A number of Hindu temples and Muslim shrines and mosques dot the banks of the river. Traditional Kashmiri mosques are known for their characteristic architecture – they do not have a dome made of stones, but are rather wooden, and have a pagoda-like shape with a steeple. This is particularly noticeable when I get to the Shah Hamdan Mosque, a little north of Lal Chowk.

From here, I take an auto-rickshaw to Hazratbal, around 15 Kms up north from Lal Chowk. Riding auto-rickshaws in Srinagar is no fun, as I discover. All rickshaws comply with a law which mandates 'doors' on both sides of the rear seat meant for passengers. The right door fully covers the entire open area, while the left one has around half of a feet opening at the top. Sitting in this space reminds me of those cyber-cafes popular 10 years ago with private computer cabins like this. Disappointed at the limited view of the old city roads and the Nagin Lake on our way, we reach the Dargah in another 30-40 minutes. 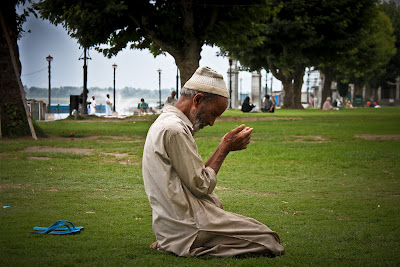 The Hazratbal shrine – also known as Madina-i-sani, or the second Madina, and dargah-i-sharif – is a tall white marble complex on the West of the Dal lake. It's one of the most sacred Muslim shrines of Kashmir, and is believed to contain a sacred hair of the Prophet Mohammad's beard. Hazratbal shrine originally had the traditional pagoda-shaped structure similar to other mosques, but the structure was dismantled in 1968 to build a marble mosque with a dome and a minaret similar to Madina's holy mosque. The shrine is flanked by the Kashmir University campus on the north and the NIT Srinagar campus on its south, providing a serene calm to the whole region – quieter than what is normally observed in Islamic mosques. I get inside the mosque with a handkerchief on the head (instructions on the gate ask you to cover your head), and after someone prompts me, carry my chappals in hand. It's probably the time for namaaz, and I'm asked to wait for 15 minutes by a security guard before I can get in (I am using the entrance made for men – women aren't allowed in this central part of the shrine, and have a separate entrance to a portion of the mosque on the other end). There is a small instruction pasted inside, asking non-Muslim visitors to walk around only in the galleries encircling the shrine, rather than cutting through the main shrine – quite a helpful tip for naive camera-toting tourists to prevent them from disturbing people praying in the center. The whole place has a divine serenity, and sitting inside the shrine is probably the spiritual equivalent of watching the Kashmir Valley itself.

After a few minutes of sitting inside and soaking-in the calmness, I walk out to the backside of the complex which opens up to the Dal lake. It is here that one realizes the enormity of this lake. The tourist-heavy portion of Dal's south tip near the Boulevard probably covers only a tiny fraction of the whole lake. The north and center portions of the lake are enormous in size, and from Hazratbal's Wuzu area in the back, one can see a beautiful view of the city and the mountains around the lake. A complete round of the lake is around 35 Kms in length, with some of the best views located in the northern portions.

From Hazratbal, I use another auto to go around Dal's northern ring, and witness those numerous waterways around the lake which earn the occasionally used name "Venice of the East" for Srinagar as well. One can see the locals carrying lotus plantations on small boats along these waterways, which are still safe from tourist encroachments.

My next stop is the Shalimar Bagh – a Mughal garden built in the early 17th century by Jahangir for his wife Nur Jahan. The garden stretches to more than half a kilometer in length and around 250 meters in breadth, and has an elaborate architecture split in four terraces. A central canal lined with polished stones runs through the middle of the garden, feeding water to each of the terraces in succession, finally going into the Dal. The black pavilion in the top terrace of the garden has the famous inscription by the Persian poet Jami –
"Gar Firdaus rōy-e zamin ast, hamin ast-o hamin ast-o hamin ast."
(If there is a paradise on earth, it is this, it is this, it is this.)

There are two more Mughal gardens in the city which I decide to give a pass – the Nishat Bagh designed by Noor Jahan's brother, and the Chashma Shahi built by Shah Jahan. All these gardens provide picturesque views of the Zabarwan Range or the Himalayan Range.

I decide to call off a day, and visit the TRC once again in the evening, trying to figure out a to-do for tomorrow. The lady disappoints me - "Tomorrow is 15th August, and the TRC, as well as all government buses will be non-operational. You can hire private vehicles to get out of the city, but I'll advise you to rather stay back in your hotel, and just visit the Dal lake on foot, if you want to get out." I immediately ask her about Gulmarg the following day, and she happily gets me advance tickets for a Gondola ride in Gulmarg for Thursday.

I have a free day tomorrow, and hence I decide to stuff myself with a second and last meal for the day. I walk to another recommended restaurant called De Linz on Residency Road, and try the Rista – another Kashmiri delicacy. The waiter asks me if I'm keeping the Roza – the restaurant is serving complimentary phirni to people who are fasting. Looking at my puppy-dog eyes buried in a disappointed face, he decides to offer me a free serving anyway, and another day in Kashmir ends on a sweet note.


Posted by KV at 12:56 PM
Email ThisBlogThis!Share to TwitterShare to FacebookShare to Pinterest
Labels: Kashmir, Travel

Wanna know more about Hazratbal experience. Your eyes betrayed you..otherwise expected little truth from a guy who would prioritize food over anything.. but then u got ur free Phirni :)

Well, in the time of Ramzan, food part comes only in the evening. I visited Hazratbal around noon. :)
But well, the experience inside the mosque is pure bliss!