An old adage says that the journey is often more important than the destination. In Kashmir, a lot of times, it's hard to distinguish between the two.

Visiting Sonamarg is a journey to the Himalayas, through the Himalayas themselves; and after a little while of embarking on this journey, you wouldn't really care what the destination was. Traveling to Sonamarg is like floating into the most simplest forms of human dream – brightened, spaced out and easy, non-engaging, non-involving, but silently rustling through the heart – one that leaves a pleasant, prolonged aftertaste even when you've woken up. 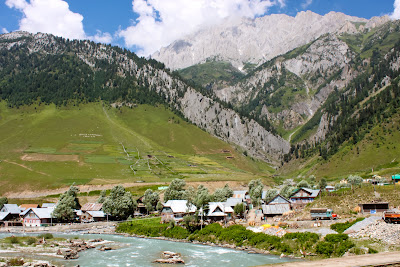 It is said that the snow-capped Himalayan peaks reflect a golden sparkle in the sun, earning this place its name which translates to "Meadow of Gold". I didn't have the good fortune of witnessing this, but well, the destination simply didn't matter. The first 25 Kms from Srinagar to Ganderbal is a traffic heavy, dry sort-of route. Beyond Ganderbal, there are 60 more Kms of narrow roads through the mountains all the way to Sonamarg. It is this particular distance on which you play hide and seek at every turn, that makes actually reaching Sonamarg a non-event.

Ganderbal to Kangan is around 20 Kms of journey through thick vegetation – the Himalayan foothills with their rich flora lay down a canopy of trees covering the road in a dreamy shade for almost the entire stretch. Beyond Kangan, you start climbing up towards Sonamarg, which lies at about 8,900 ft. above MSL – the climb isn't like a standard circular road going up towards a mountain peak; here, the Himalayas have spread themselves lazily, but authoritatively, across a span as wide as eyes can see, and numerous mountain peaks stand side-by-side, in their own introverted pride. You drive through multiple mountains, and it seems like you do this without reaching anywhere in particular – this world consisting of mountains as high as 5000 meters doesn't seem to know words like competition, stature, winning, and outlasting. The only fitting words here would probably be discovery, seeking, sharing, and happiness.

The river Sindh, which later becomes a tributary of the Jhelum, originates at one of the glaciers in these mountains, and accompanies you with its sweet chirpy music of water sliding and crashing on rocks all through the 60 Kms stretch between Ganderbal and Sonamarg. Numerous streams from different mountains come and join Sindh, and you can trace the path of these thin streams all the way from the glacier at the top, down to the river flowing besides you. Surprisingly, none of these things surprise you – after spending only a little time in this world, such incredible ensemble of beauty just seems natural. Nature here is almost generously infectious; it takes no time in making you an extension of itself.

My stay at Sonamarg was very brief – the onwards journey was a little too tardy, given the local buses I had to take and vehicles I had to change at a couple of places after J&KSRTC had disappointed me once again in the morning. At Sonamarg, there are ponies which can take you to the top and show you glaciers up close – I didn't have enough time to do that, but it didn't matter at all; this place is like an abundance all around, and the concepts of 'more' or 'less' of something had already ceased.

After a return journey equally affluent, the mind was still lingering on with the valley's aftertaste, and I let myself float once again in one of the shikaras at Dal.

Tomorrow, I am leaving Kashmir, and this aftertaste is strong enough to last for a lifetime.


Posted by KV at 1:38 PM
Email ThisBlogThis!Share to TwitterShare to FacebookShare to Pinterest
Labels: Kashmir, Travel

@Anonymous:
The tourist traffic here has dwindled with approaching Eid and there are no dedicated vehicles anymore – it's tough to get to those beautiful Nags (springs) with local routes. A week seems like nothing for Kashmir. :(
With this trip, I'd consider western Kashmir done, and will focus on that dream item in the bucket list: a biking trip in the Leh-Ladakh region covering eastern Kashmir.